Flight Club is considered by many to be the go-to store for limited edition and rare kicks, but the popular shop has been in the headlines recently after several customers claimed they’d received fake sneakers.

The controversy has confused sneakerheads, who have turned to social media to ask, “does Flight Club sell fake shoes?”

No, Flight Club doesn’t sell fake shoes. Instead, they sell rare, unique, and authentic sneakers compared to other retailers. They also claim that the controversy occurred for some unethical people trying to downgrade the popularity of Flight Club by affecting their delivery and legitimacy process.

Here’s everything you need to know about what really goes on at Flight Club and whether you should shop there again.

What is Flight Club?

I’m sure that you have heard of Flight Club before. If not, they are an online retailer known for selecting rare sneakers and other popular sneaker brands.

They carry everything from old Air Jordans to limited-edition sneakers with special packaging. You can visit them on their website to get an idea of what they have. Or you can always check out their Instagram page as well.

At first glance, you might think, why would I buy from a site like Flight Club when tons of other places sell authentic sneakers at competitive prices.

Flight Club’s remarkable and rare shoes make it stand out. You don’t find this anywhere else in the sneaker industry.

Another thing about Flight Club is that they are constantly getting new stock every day, so if you want to stay up-to-date with all of your favorite brands, then checking in often will help a lot.

Some people complain that Flight Club sells fake or knock-off shoes. You can see a comment from a customer picked from a discussion on Reddit regarding Flight Club.

But many others think they are a great place to shop for rare kicks. So let’s explore both sides and see where it leads us.

The short answer to the question is NO. Flight Club does sell fake shoes and sneakers.

However,  Flight Club claims that there may be some mistakes and dishonest people who tried to mess with the delivery or legitimacy determination process or just want to downgrade the popularity of Flight Club.

So, is Flight Club real or fake? It’s real; however, some incidents due to undesirable cases pushed them into the dark zone.

So, the answer, however, involves a bit more nuance and explanation.

Can Flight Club be trusted?

Since its birth, Flight Club has had over one million satisfied customers. A level of customer satisfaction is rarely seen in today’s world. But that doesn’t mean there aren’t any problems.

Despite their best efforts to only carry genuine merchandise, they say that for some dishonest workers and authentication errors, unfortunately, some customers have received counterfeit goods.

The good thing is that the number of this kind of report is rare.

And by analyzing thousands of reviews on several platforms like Trustpilot, Amazon, and other places, we can say that you can trust Flight Club.

Yes, they verify nearly every shoe on their website via a third-party authentication service. There are some exceptions to these rules, but for the most part, you can be sure that if it’s on Flight Club’s site, it is real and authentic.

In most industries, you’ll find that a company’s brand is directly related to its customer service. In general, customers appreciate transparency-so if they have a problem with your product or delivery, tell them precisely what happened and why.

For Flight Club specifically, their customer service experience is good as far as we observed. You can see this review-

They address any concerns about fakes being sold on their site. It will continue to help build loyalty among their customers by showing that they are honest in running their business.

But one thing to remember: no matter how much information you provide, some people will always be unsatisfied. That’s just part of running a business.

What Do Trustpilot Reviews Say About Flight Club?

The reviews are mixed regarding whether or not customers have received fakes.

On the one hand, several people claim they were scammed by paying for authentic products but receiving fakes in return.

For example, a customer named Susie said to have a very easy and seamless experience with Flight Club.

On the other hand, many people don’t believe these reviews because they received authentic items from FC without any problems.

As you can see, one customer named Cyrus King was having some trouble with authenticity, but ultimately that ended up in a good way, and he still recommends Flight Club. 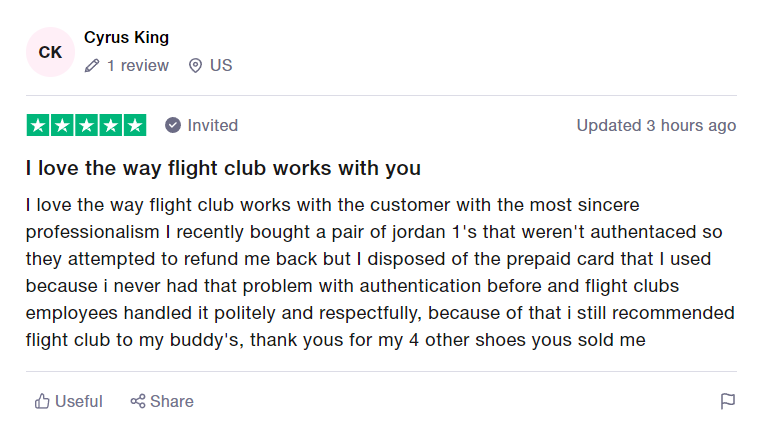 While we can’t confirm that you will receive authentic merchandise, we can say that if you receive fakes, you should file a dispute with your credit card company immediately and request a refund.

However, the chances of getting fake shoes are very rare.

Here you will see another customer expressing that he has been shopping for three years without facing any fake feat!

How To Tell If Shoes On Flight Club Are Real?

The problem is, there’s no accurate way to tell if your sneaker has been stolen or if it’s legit until you buy it and get it in your hands. And even then, it can be hard to tell. However, are shoes on Flight Club Real? Well, they are real.

But, before you commit to buying any sneakers from an online retailer like Flight Club, here are some tips for telling if they’re real-

If you’re buying sneakers sold in boxes, they’re more likely authentic. (Of course, some fakes come with boxes, too.) But if you don’t see a box, proceed with caution.

Sneakers sold in stores like Foot Locker and Finish Line come with a sticker on their box with a hologram (or something similar) to prove they’re authentic. If you don’t see one, it could mean your sneakers are fakes-but not always.

Some legit pairs of sneakers don’t have them because you purchased them directly, but it’s still worth looking for one when buying online.

If you’re buying a pair of sneakers with a serial number, check to see if it matches what’s listed on the manufacturer’s website or other sites like eBay and Amazon. If it doesn’t match, it could mean your sneakers are fakes-but again, not always. Some legit pairs don’t have them.

If you see a misspelling or grammatical error, it could mean your sneakers are fakes.

Here is a list of 5 best-selling shoes of Flight Club that are 100% authentic.

What To Look For When Purchasing Sneakers Online: Legit Checklist

If you’re interested in purchasing from a sneaker marketplace, be it Flight Club, Amazon, eBay, or one of several websites specializing in selling limited-edition kicks, there are certain telltale signs.

If something seems too good to be true online (and chances are it probably is), ask questions. There’s no harm in doing so and if you can’t get a straight answer, move on.

How To Avoid Scams of Fake Shoes?

First and foremost, you want to make sure that your purchase of a pair of sneakers from Flight Club is legitimate. Many flight clubs have been exposed to selling knockoff footwear in recent years.

How do you avoid being on a flight club scam list? Here’s how you can check to see if your flight club is selling fakes or not:

One more thing you can look out for is negative reviews that mention problems with refunds or exchanges and bad experiences with customer service. It could be another sign of a flight club scam.

Buying from a legit retailer can help avoid purchasing counterfeit products. If you’re a sneakerhead, try to stick with reputable retailers that have been around for years and carry a solid track record.

Does Flight Club sell fake shoes? No, they don’t. They are famous for selling authentic and rare sneakers. However, the controversy of selling fake shoes put them back a bit; they claimed that a few dishonest people are responsible for this.

However, consider checking the shoes to be 100% sure of their authenticity when you buy them.

ShoeBallistics.com is a participant in the Amazon Services LLC Associates Program, an affiliate advertising program designed to provide a means for sites to earn advertising fees by advertising and linking to Amazon.com.